I wish it were required that all classrooms have gigantic north-facing windows and colorful walls
It's hard to take the photojournalist out of the photographer.
Here's a fun MadLib: 100% vaccinated students dance at a silent disco with inflatable sharks in a university multipurpose room.
BUCKS IN SIX
A few photo highlights from biking and hiking around Glacier National Park
Today was a good reminder that when it comes to lighting simpler is usually better.

Breaking news is an interesting animal.

As a photojournalist, or just a journalist in general, it’s hard to tell what side is up, what facts are real, who to believe, where to go and who to talk to. Editors call non-stop for updates and constantly push for more details from the ground. Every media outlet wants to be the first with an exclusive new detail.

The past two days I had the opportunity to freelance for the New York Post and cover the tragedy unfolding in Oak Creek, Wis., where Wade Michael Page opened fire at the Sikh Temple of Wisconsin.

As I arrived on the scene yesterday (very late I might add, since I didn’t get a call from the Post until 3pm), just about everything was cordoned off several blocks away from the shooting. Victims’ family and friends were allowed to visit them as they sought shelter in a bowling alley across the street from the temple. From a photographer’s perspective, taking photos from this vantage point made me feel like I was shooting in an aquarium—they were in there, and I was on the outside looking in.

Especially in tragic situations I try to maintain a grasp on the humanity of a situation and not lose sight that these are people, they are grieving and I really have no excuse to be here with them other than I’m feeding a curious public. They deserve their privacy.

There were definitely moments where I felt uncomfortable photographing friends and families of the victims, mostly because of the distance that separated me from them. With no relationship to my subject, shooting them felt odd, if not wrong.

When word spread of a vigil in downtown Milwaukee, I sprung at the chance to head down there. Not only were the photos going to be more interesting, but I would feel more comfortable having a closer proximity to my subjects and an opportunity to be invited into their emotional moment, rather than as an unseen observer on the outskirts. 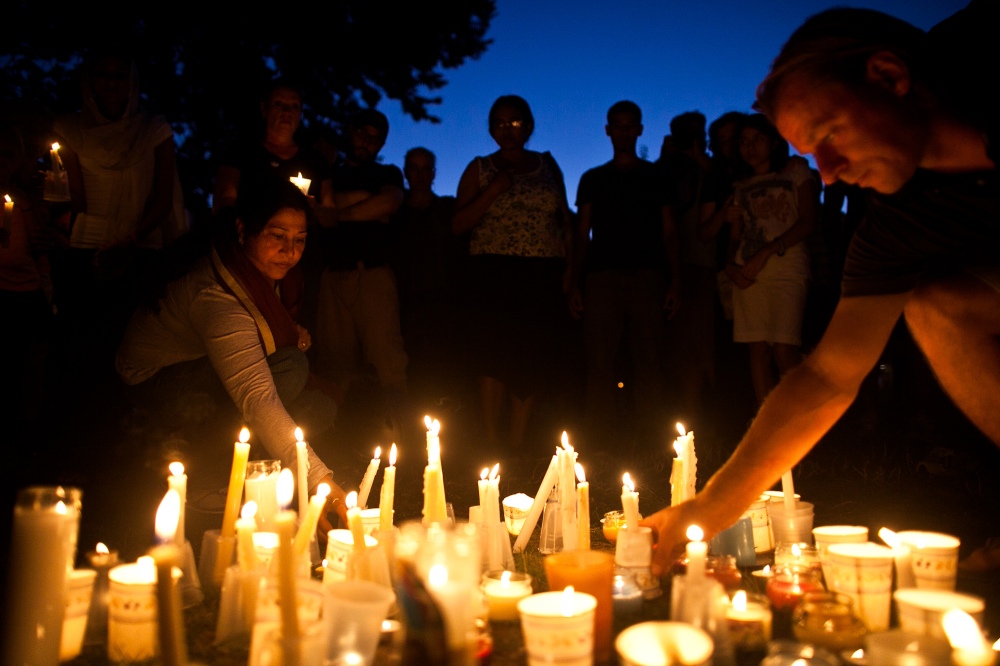 The reporter and myself ended up staying over night to continue coverage early this morning. We spent about five hours walking from house to house, seeing who knew Page.

This was precisely where things got a little hairy. Residents tossed around lots of anecdotes and details…not all of them truthful, and just about all of them subjective judgments garnered under the context of a tragedy. To confirm their stories was difficult, especially since so little is still known about Page. His involvement in a white supremacist organization is still not totally confirmed as of this post, but TV news stations still lead with the information as though it were fact.

Half-truth facts are a scary thing as a journalist. In the heat of a tragedy like this, the importance of getting it right is paramount. Even though I have a number of breaking news assignments under my belt, I took away that important lesson—get it right and keep seeking the truth.

Many thanks again to Pedro Oliveira Jr. for giving me the chance to work for the Post.

2 thoughts on “Shooting at Sikh Temple in Oak Creek”