Just dropping in to say spring has arrived in Chicago. That's all, carry on.
Dancin' like it's 2018 🩰🏀
Today's moment of minimalist zen
A sentence that would have sounded truly insane around this time last year: "To celebrate the end of their two week quarantine to kick off the Spring 2021 semester, Loyola freshmen grabbed fresh donuts and watched the frigid sunrise over Lake Michigan."
Oh hey, Chicago finally got some real snow and (a few more) students moved-in on campus and I'm drooling into a vial once a week—how's everyone else doing?
A couple recent portraits of Loyola faculty researchers who focus on the impact of urban greenery projects on gentrification in Chicago. Photographed at the proposed site for the El Paseo Trail in Pilsen and the Bloomingdale (606) Trail in Logan Square.

Posted on December 9, 2011 by lkeapproth

Sheboygan is the Malibu of the Midwest, at least for surfing.

The day of the cover shoot for Curb Magazine, Sheboygan weather was the antithesis of Malibu. Cold, 45mph winds gusted off of Lake Michigan and the water temperature sat just around 40 degrees. The sky was a cloudy bluish gray and sand-sized rain droplets pelted us for almost the entire 2 hours we were out there. 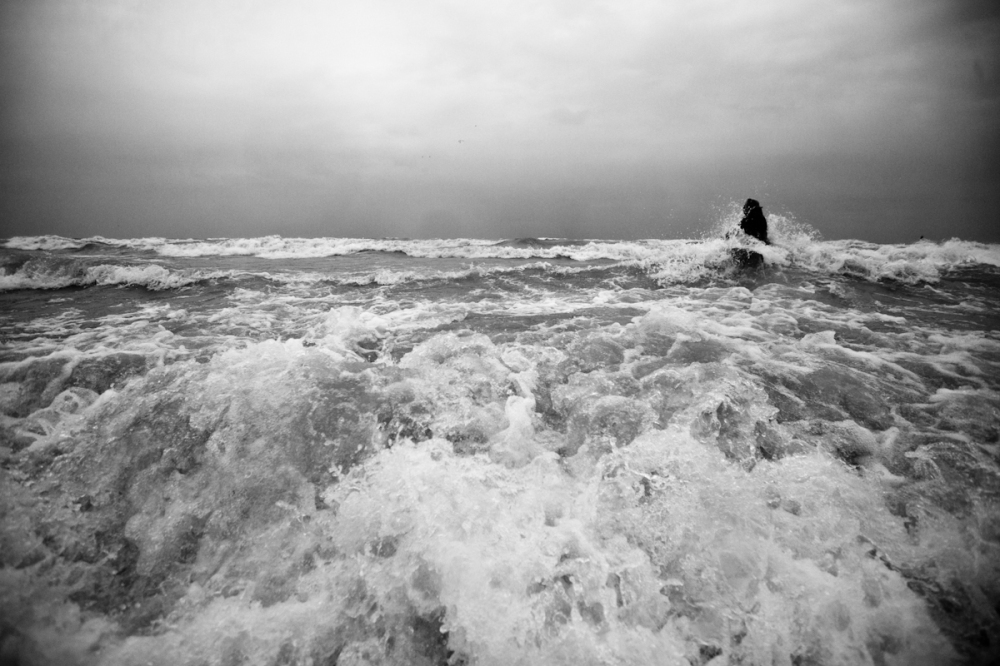 Needless to say, there were lots of issues to overcome with this shoot. The quality of light was probably the biggest issue: since I couldn’t haul out my lights in the rain (having the battery out in the elements scared me even more) I had to use available light. While it was soft light, it was too soft with no direction and looked pretty boring.

The other big problem was the weather itself, which had created a cistern of waves that were more or less unsurfable. And the entire point of this photoshoot was to get a cover photo of the guy surfing. Ugh.

After I squeezed into my wetsuit (which is a story in itself, I assure you), my subject and I made a valiant attempt to get the surfing photo anyways. That didn’t work out at all, and I was beginning to think it was only a matter of time before I slipped and dropped my gear into Lake Michigan. So I cut my losses and decided to just do some portraits… 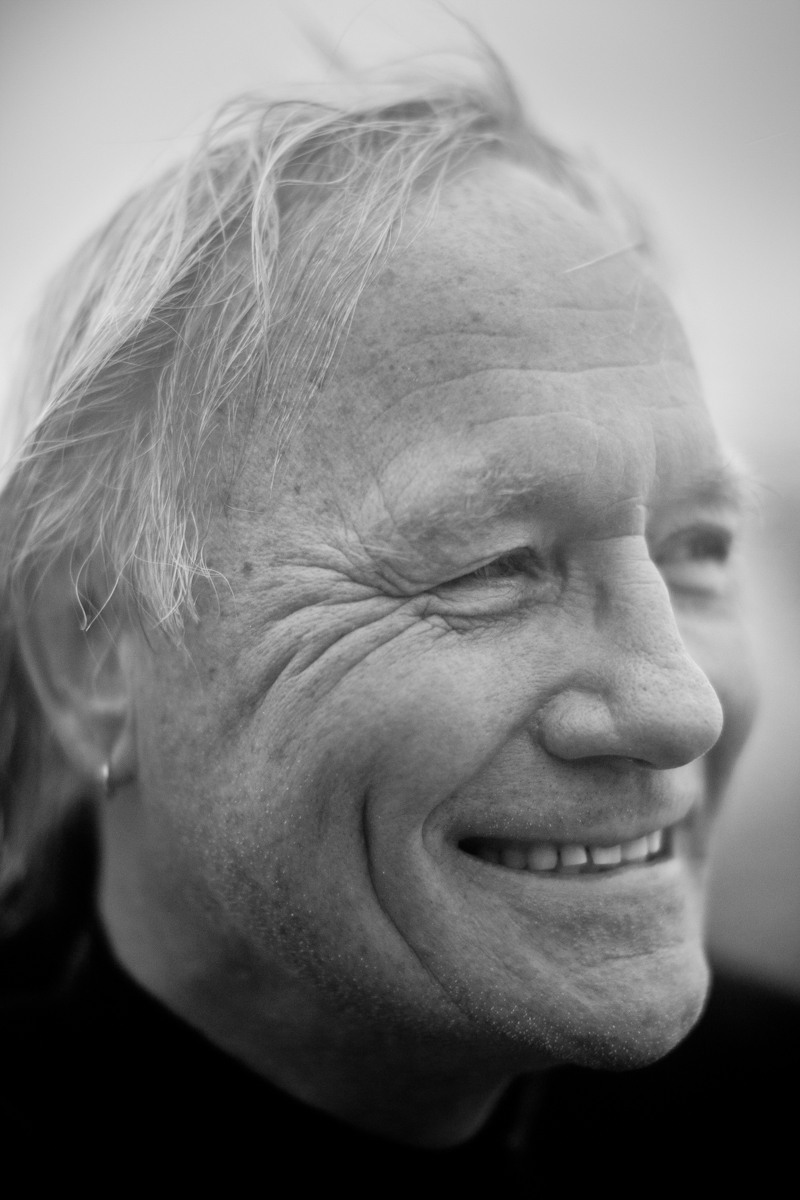 These are fine and dandy, but still…meh. Not as cool as surfing photos. But instead of trying to fight the weather, I thought I’d just get some inside art of him just walking around and doing more active things. Most importantly, I thought I would buy some time in case the weather did improve and I wouldn’t have such a hard time focusing my lenses with all the raindrops on the filters. 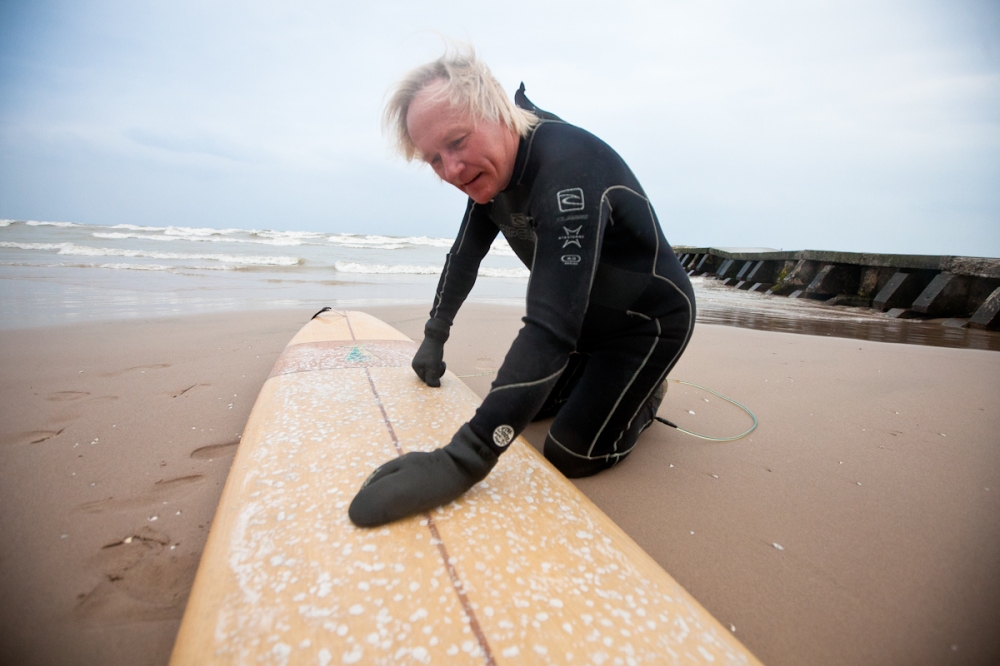 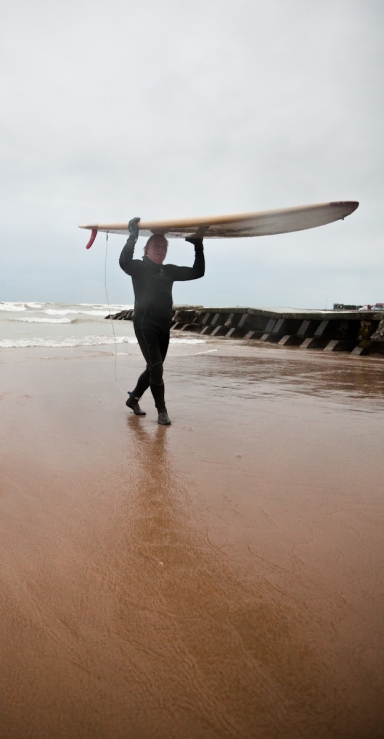 Weather didn’t improve though and it looked like I would just have to settle for using my portraits. I wasn’t happy about it, but it’s hard to convince the largest fresh water lake in the world to cooperate.

After I changed out of my wetsuit, we decided to take one last stroll along what is called “The Elbow” in Sheboygan. Basically it is the long pier leading out into one of the prime surfing spots on the shore. With the sun beginning to set, the colors in the sky turned a nice blue. Conveniently for me a surfer passed me with his (nearly) matching blue surfboard. I quickly shot a few off a few frames and followed him until I felt satisfied with what I’d gotten. At the time though, I thought of it as a throwaway shot that I might give to the magazine if they wanted some filler.

Turns out my throwaway shot (and the last frame I shot that day) is the cover. Nice.

Check out the article here

2 thoughts on “Surfing in Sheboygan”