Today was a little lesson in timing, patience and a little bit of awkwardness.

Even though Madison made it through today’s early morning storm, South Central Wisconsin wasn’t as lucky. On my drive into Janesville there were entire corn fields with stalks laying flat on the ground, tree limbs blocking roads and numerous crews trying their best to clear streets.

My assignment this morning was to poke around the few towns north of Janesville on my drive to look for people cleaning up after the storm. My first stop was in Evansville, where a group of young neighbors were taking turns sawing up tree branches for firewood. I approached them as casually as someone carrying 2 cameras, a camera bag and wearing dress clothes can…which isn’t very casually. (Seriously, I get some of the weirdest looks and comments about the fact that I’m wearing dress clothes while working…) They all stared. I waived. They couldn’t hear me over the chainsaw, so I awkwardly stood and snapped a few frames off.

Soon thereafter the chainsaw stopped working, but I still wanted to get a few more shots of them cleaning up, so I decided to stick around while they went to get another chainsaw. In this instance, my patience didn’t pay off. Instead, it was just really awkward. They were obviously thrown off by presence and I didn’t have anything to say.

Finally, I decided to cut my losses and just go back to the office to get a few tips on where the worst damage happened in Janesville.

Just down the road from the Gazette’s office there was some pretty unfortunate damage to many of the homes, yards and trees. I passed this house where a tree collapsed nearly half of it. Since the house was on the opposite side of the street and I didn’t want to slam on my brakes to pull over, I decided to see what else there was and spent about 15 minutes shooting fallen trees and people working together to get everything to the curb.

When I stopped back at the house, the owner’s son just pulled in (woot for good timing). Luckily, he was also very accepting of me taking photos — he even let me crawl around on the roof.

This was my first experience photographing a natural disaster quite like this…I didn’t want to offer lame condolences to him about his house. I honestly felt bad, especially since his was the only home that had serious structural damage.

“It sucks, but the big thing is no one was hurt. That’s the positive for me,” he said. 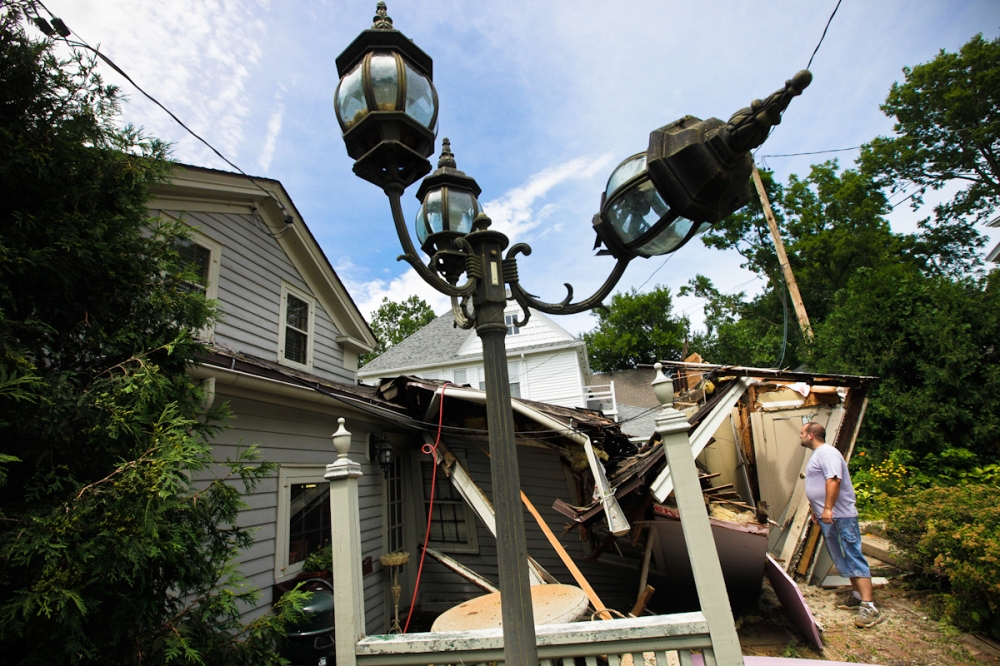 One thought on “Wisconsin Storm Damage”