Today is the release of my first major project for the Wisconsin Center for Investigative Journalism. Since late January I’ve been tracking the Occupy movement’s activity within Wisconsin, specifically looking at Madison’s camp, which is believed to be the last encampment left in the state (see the full story and photos here). When I got the idea to begin covering the story, I had no concept of the amount of depth and research that would be involved in the reporting process. Even though I’ve been working with newspapers for the last 4 years now, this project was the first time I had been exposed to an investigative journalism story.

Needless to say I learned a lot from the process and the mistakes (oh, the many, many mistakes).

Since Occupy Madison is comprised mainly of homeless individuals, the biggest challenge to overcome with the camp was establishing a trusting relationship. Whether actual or perceived, homeless people often feel taken advantage of in many circumstances, and I wanted to make every effort to create an environment of a mutual working relationship, not merely me taking from them.

The Center offers me a unique advantage of time. Without time, this project would have been impossible. Also, working with a flexible deadline takes a lot of pressure off of my reporting. Even though I was responsible for writing the story and working on a photo essay, I was able to do both independently at times or simultaneously at other times. I was also able to just go to the camp and hang out for a few hours, with no pressure to produce immediately.

I think eventually a number of the Occupy members came to understand the work I was doing, and were candidly open about their lives, backgrounds and politics.

No one was more open than Dale, who I spent a number of hours with visiting him and talking about his involvement with the camp. I think my relationship  and genuine interest in his life allowed me to get one of my favorite images of the photo essay, where he’s asleep in his tent after we grilled some brats (in other words, he slipped into a food coma). Before he laid down he gave me a small tour of his tent, much like anyone would give a tour of their new home. He was proud of what he had and wanted to make sure I documented it. 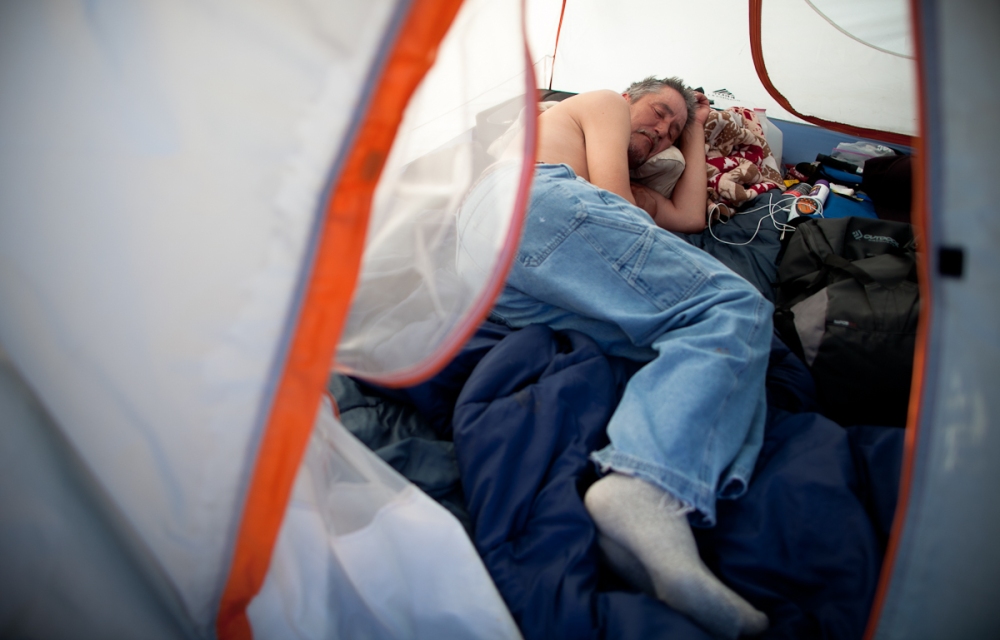 The other perk of having time on your side is the choice in lighting. Being able to pick and choose the time of day and the type of light I shot under was pivotal in getting photos that were much more visually appealing than if they were all shot under other conditions. I must have waited days and days to get a clear blue, twilight sky with the tents glowing in the parking lot. The biggest problem was the Occupiers didn’t often turn on the lights at dusk…but when they flipped them on right as the “blue hour” was coming to a close, I was pumped. I waited for a few minutes, walking around and between the tents hoping to get a nice silhouette against the tent. When the figure walked right into the frame of the tent, that was just icing on top.

I’m curious as to which news outlets pick up the story and how they run the photos. I know the photo page is something that has disappeared for the most part in daily newspapers, so any chance I get to see a flicker of the good ol’ days, it makes me happy.

Hope you enjoy the story and photos. I’m excited to begin work on the next project and continue collaborating with the other journalists at the Center and their in-depth pieces.