Just dropping in to say spring has arrived in Chicago. That's all, carry on.
Dancin' like it's 2018 🩰🏀
Today's moment of minimalist zen
A sentence that would have sounded truly insane around this time last year: "To celebrate the end of their two week quarantine to kick off the Spring 2021 semester, Loyola freshmen grabbed fresh donuts and watched the frigid sunrise over Lake Michigan."
Oh hey, Chicago finally got some real snow and (a few more) students moved-in on campus and I'm drooling into a vial once a week—how's everyone else doing?
A couple recent portraits of Loyola faculty researchers who focus on the impact of urban greenery projects on gentrification in Chicago. Photographed at the proposed site for the El Paseo Trail in Pilsen and the Bloomingdale (606) Trail in Logan Square.

I experienced a part of Wisconsin (and its people) that I had only heard about in the folklore stories of Northwoods’ shenanigans when I covered hog wrestling in Twin Bridge, Wis., yesterday.

The event in itself is already odd — teams of four compete against the clock to wrestle a pig, pick it up and carry it to the center of the ring. The ring is filled with 9 inches of mud, water and, likely, pig feces. But it’s the people who make the event a truly odd spectacle. Some teams dress in various themed costumes like a Yetti or 80s WWF wrestlers, others wear as little clothes as possible. Some wrestlers, in what I assume is an act of fearlessness or just plain drunkenness, will drink the water after wrestling the pig. There are even some who go so far as to take their shoe off and pour the water from their shoe into their mouth. All while the crowd cheers them on. 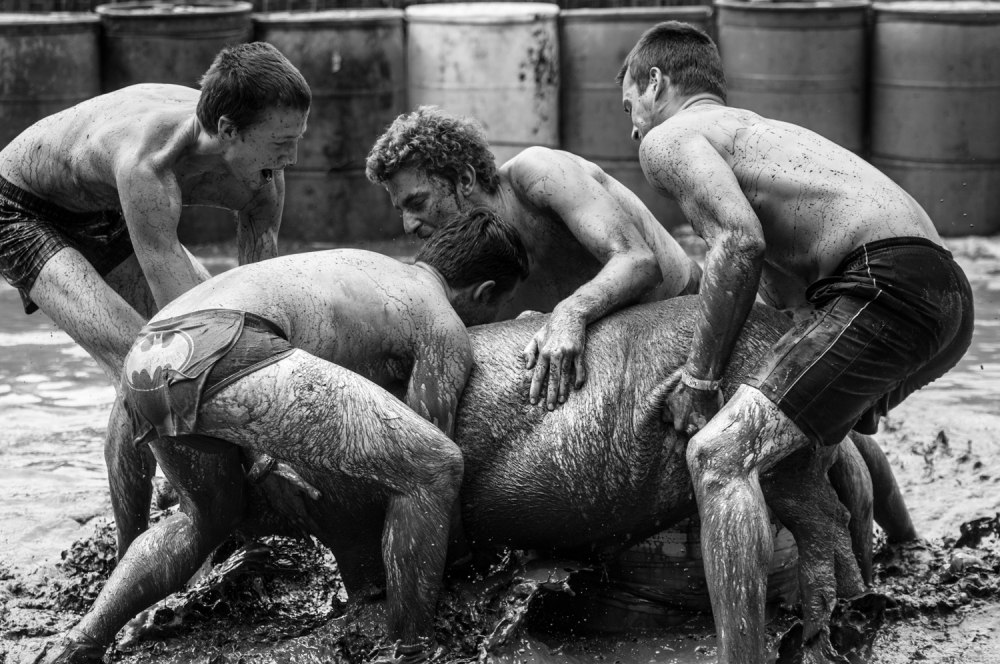 To get the courage to sometimes plunge head first into a mud cesspool to wrangle a pig, drinking is heavily encouraged. Most teams lined up at 9:30am with beers in hand to register their team before wrestling commenced at noon.

The prize for being the team with the best time? A half-barrel of beer. And bragging rights. Some veteran wrestlers proudly sported shirts from their championship times, with some teams having participated for 18 years in a row. 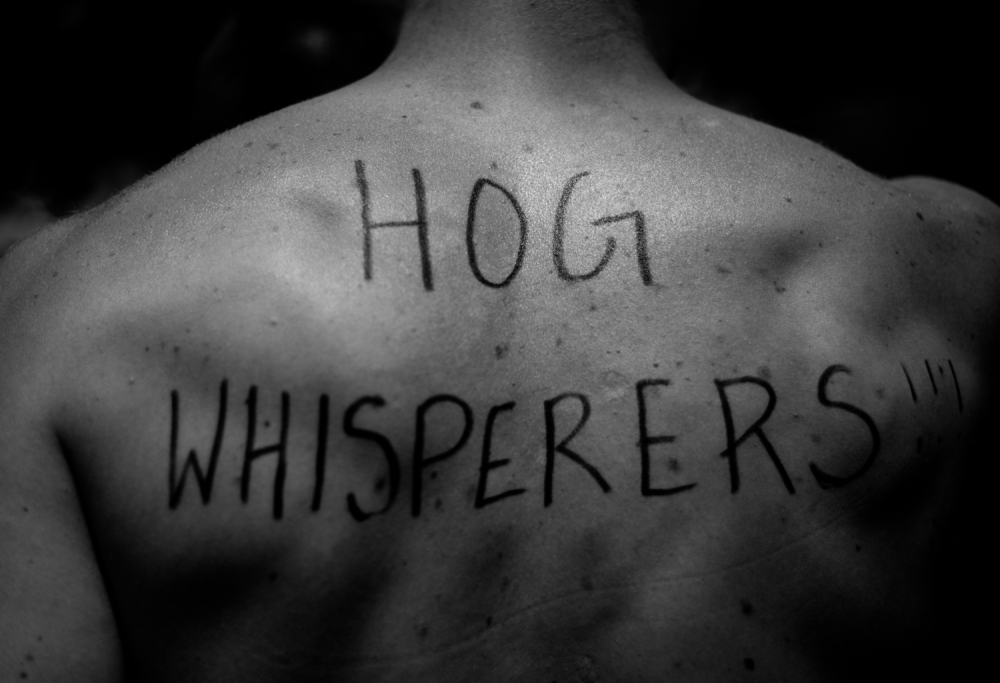 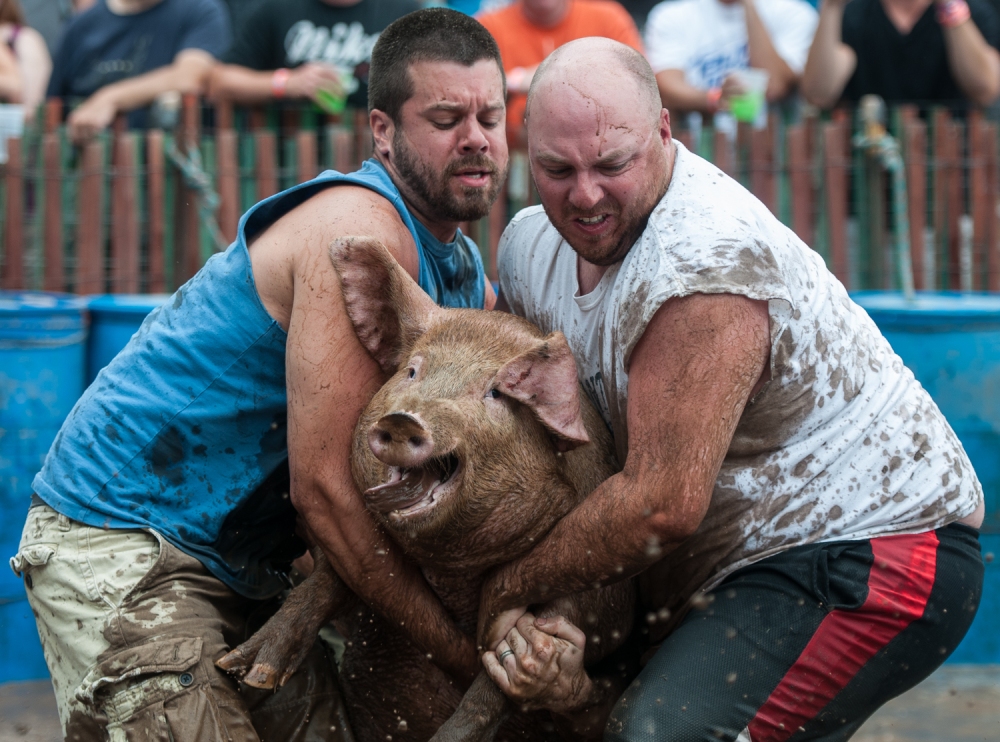 Attendants of the hog wrestling competition wear their dirty, drunken and irreverent attitude as a badge of honor and as something that is quintessentially Wisconsin. I heard the phrase, “that’s just how we do it in Wisconsin,” a good half-dozen times. And that mentality gets to the core of why I find events like these so interesting. Even though I grew up in Wisconsin and have lived here my whole life, I was never exposed to the sort of lifestyle these people live until I started working for newspapers. Getting to do these stories, however silly they may seem, is a really cool way for me to see the variety of cultures and subcultures in Wisconsin. 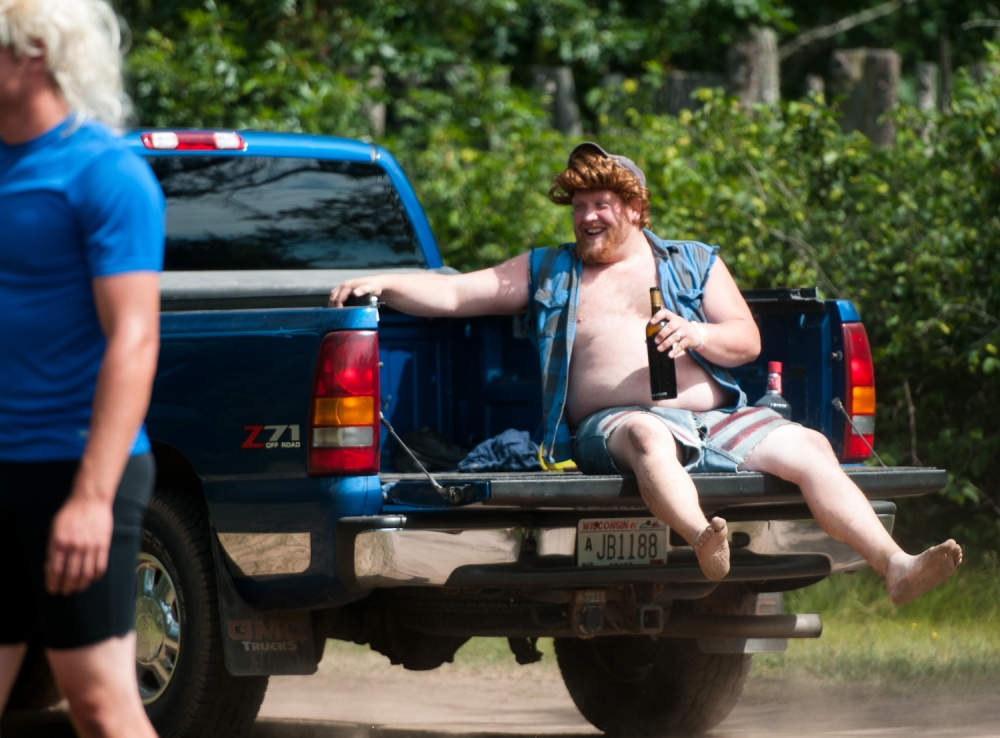 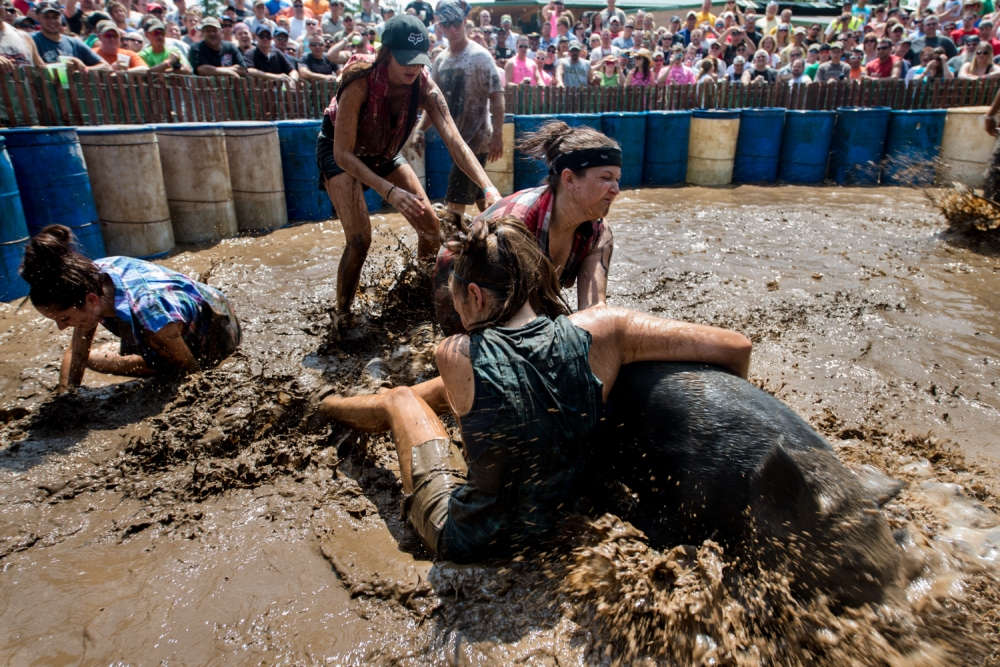 While I was in the ring with the wrestlers to get as close as possible to the action, all I could think about was the oft-quoted line from Robert Capa, “If your pictures aren’t good enough, you aren’t close enough.” By the end of the event I was sunburned, dehydrated and sopping wet with mud on my face, pants, shirt and cameras. But it was worth it. I’m glad I got in there and experienced the event up close. And it was nice to hear from various audience members who saw me dodging squealing pigs that they appreciated my efforts to get the best photo possible. One guy pulled me aside and said, “You had a big ol’ smile on your face that whole time. You’re crazy.”